The Bagger is back together and seems to be running okay.....for now.... 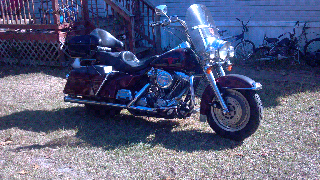 Posted by Warlock Sundance at 10:03 AM 9 comments:

The Superglide is OFFICIALLY running again!!!!
Runs pretty damn good at that..........in less than a quarter mile stretch of road in front of my house
I broke 100 mph.....(oh shit grab brakes....)
I think I am happy with its recovery.

The road king......wellllllllll.............
I drained the gas from the tank....(stuff always breaks when the tanks are full for some reason)
Removed the tank to inspect the wiring.....uhhhhhh.....nothing abnormal.
Okay....took the tail light off.....BINGO......
A while back I had replaced the tail light with one of them fancy LED ones......
Seems there is a chafed wire where the wiring goes through the fender.

Run out of time to work on the bagger though. Will be on the road all weekend on the
Superglide. Places to be, people to see. The bagger will wait.

Thanks Phelan for the input from Dan.....
Posted by Warlock Sundance at 1:07 PM 3 comments:

The Superglide cranked today.
I received the ignition sensor in the mail, installed it....slapped the shit out of the gas tank...
It fired up.....
Almost there. Now it is just a matter of putting all the covers back on and away I go.

The bagger......well.....just drives me nuts chasing gremlins in wires. still working on it.

Drives me nuts......Just got the "bagger" out of the shop. Had a new transmission installed. After 85,000
miles the tranny was toast. It ran really good....till a damn poltergiest got into the wiring somewhere.
Now, everytime I turn the handle bars all the way to the right....the damn motor dies and the lights go out.

So I have windshield, dash.....everything tore apart trying to find the gremlin.....and learn that the problem occurs when I plug the instrument panel back in and turn the bars right.....go figure....Don't need the tachometer, and gas gauge....fuggedaboutit.....the speedo is cable driven....and who needs dash lights at night on a motorcycle....or a neutral light for that matter....FN HARLEY....

The Superglide left my ass on the side of the road the other night. No fire to the plugs....wife comes out in the middle of night with truck and trailer to pick us up....

I was on my Superglide riding to work yesterday. I could hear my wife's ringtone playing on my phone over the sound of my Harley as I swept my card in front of reader to open the gate at work.....
"Funny.....she knows I am on the bike going to work..."

I walk in my office area and tell my co-workers the deal, and that I had to go....not a problem.

Crank the Harley up, make it out on the highway and open it up....and broke the sound barrier, my family needs me.

My Granny lived to be 93 years young. In the end, dementia got the best of her. I visited very recently and knew it was just a matter of days, and it was.

I got there in RECORD time, and Granny would have blistered my ass for riding that way....She and Grandaddy helped raise me when I was young. They always believed I would become the man I am today. My grandfather left us in 1994. My uncle Ray, who I am the closest to in my family, had been Granny's primary caregiver for the last few years was instrumental in my growing up was suddenly without his Mom....
I was on mission, family needed me. I got there before the funeral home folks....I raced through a helluva thunderstorm, but I got there.

I stayed with my uncle till the wee hours of this morning.....I would not leave until I was sure he was gonna be okay. All the arrangements taken care of.....we parted, all the rest of the family who showed up long since gone their ways home......My ride home was a little bit slower.

In less than two months I will turn fifty years old. Today it hits me.....I am still a kid and I miss my Granny.
Posted by Warlock Sundance at 10:20 AM 19 comments:

Rode the big ole maroon and black Harley a few counties away to hang out with some of my brothers.
Not a real long ride, but a nice ride.....
About half way there it sounded like a pool ball started slamming around somewhere in the motor....a real
oh shit attention getter.....
Just so happens one of the brothers runs a bike shop down where I was headed, and we were all meeting there
anyway. I tarried on, though I slowed down a little.

Well.....I thought the racket was coming from the primary, which is the chain drive/clutch stuff area between the motor and transmission. I got some tools and took the inspection covers off and felt around, and used one of the handy dandy telescoping magnet things to see what I could find in there too....nothing out of the ordinary.....hmmmm.....okay. put it all back together.

Everyone finally arrived and we rode to a restuarant to hang out and eat. Had a great time, and one of the guys present was just somebody rolling down the road, and hooked up with one of my brothers to hang out and ride too....a stranger we all made feel welcome, a construction worker here for a job....ANYWAY... When we had all finished,  I asked where the checks were, so I could pay up. I find out the stranger who we all just met paid for ALL our food....damn....I asked what?????????? The guy said he did it because we showed him a good time, friendship, and made him feel welcome......so we left the waitress a helluva tip.

We all depart and head our own ways. One of the bros stayed with me halfway home before he had to ake his left turn....just making sure I did not have any problems with the bike.....and then the damn racket started up again. I hate noises I cannot ID. Then from out of no-where another of my bros pulls up beside me on his hawg. At a stop light I asked where the hell he came from, and told him how happy I was to see him. We stop at a gas station and I fill him in on what is going on with the noise.....he stayed with me all the way home.

I made it home with the darn motor intact....I am thinking maybe something is amiss in the transmission. Oh well...we are home safe, I will get around to looking into this week....I still have more Harley's to ride. Just lucky to have made it home becauseit ain't no fun to have the tranny lock up at 60+ mile per hour.....leaves a helluva skidmark....and I just ain't talking about on the road.
Then I come in and take about a four hour nap......

And that is my boring Sunday.
Posted by Warlock Sundance at 10:03 PM 10 comments: